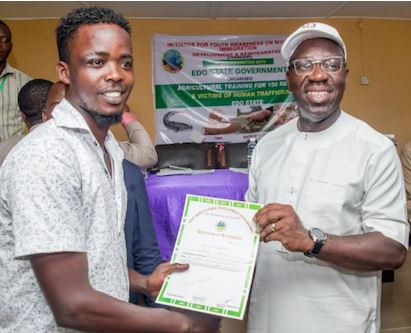 Godwin Obaseki, the Governor of Edo State has approved 150 hectares of land and N100million seed capital for the 150 Libyan returnees and victims of human trafficking, who completed a skills acquisition training at the Edo Agricultural Development Programme (ADP) office in Benin City, the Edo State capital.

Obaseki, who made the announcement during the graduation ceremony of the returnees, directed the Ministry of Agriculture and Natural Resources to immediately liaise with the relevant authorities towards securing the land for the returnees to commence agribusinesses.

According to the Governor, the returnees will be organised into cooperatives under the supervision of the Benin Owena River Basin Authority and the Edo Agricultural Development Programme (ADP). S

He said the International Day for the Abolition of Slavery, marked every 2 December, by the United Nations, should be seen as a day for a deep reflection on how to bring the illicit trade to an end. He commended the returnees, 51 of whom were trained on crop production, 15 on Agro-processing, 68 on livestock farming and 52 on Fish farming, for availing themselves of the training opportunity and promised to make them ambassadors in the state-wide campaign against human trafficking and illegal migration. He explained that the returnees are victims of a country that has failed them, adding that the state government has a duty to make them realise their God-given potential.